TL; DR These are some notes on calibration of surrogate loss functions in the context of machine learning. But mostly it is an excuse to post some images I made.

In theory, we could directly minimize the $\ell$-risk and we would have the optimal classifier, also known as Bayes predictor. However, there are several problems associated with this approach. One is that the probability distribution of $X \times Y$ is unknown, thus computing the exact expected value is not feasible. It must be approximated by the empirical risk. Another issue is that this quantity is difficult to optimize because the function $\ell$ is discontinuous. Take for example a problem in which $\mathcal{X} = \mathbb{R}^2, k=2$, and we seek to find the linear function $f(X) = \text{sign}(X w), w \in \mathbb{R}^2$ and that minimizes the $\ell$-risk. As a function of the parameter $w$ this function looks something like 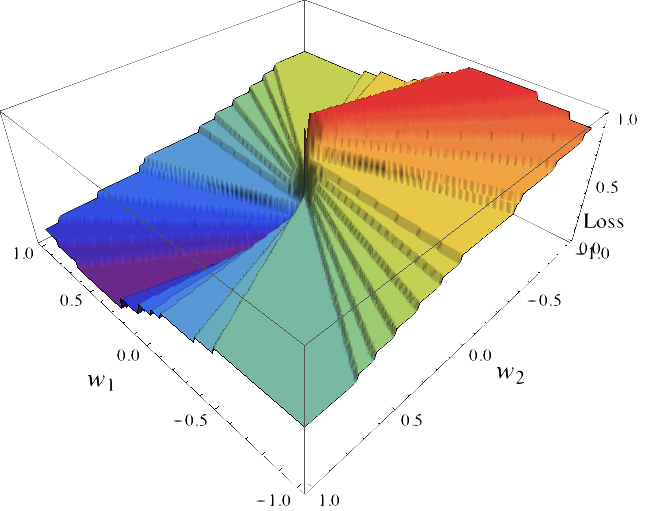 This function is discontinuous with large, flat regions and is thus extremely hard to optimize using gradient-based methods. For this reason it is usual to consider a proxy to the loss called a surrogate loss function. For computational reasons this is usually convex function $\Psi: \mathbb{R} \to \mathbb{R}_+$. An example of such surrogate loss functions is the hinge loss, $\Psi(t) = \max(1-t, 0)$, which is the loss used by Support Vector Machines (SVMs). Another example is the logistic loss, $\Psi(t) = 1/(1 + \exp(-t))$, used by the logistic regression model. If we consider the logistic loss, minimizing the $\Psi$-risk, given by $\mathbb{E}_{X \times Y}[\Psi(Y, f(X))]$, of the function $f(X) = X w$ becomes a much more more tractable optimization problem: 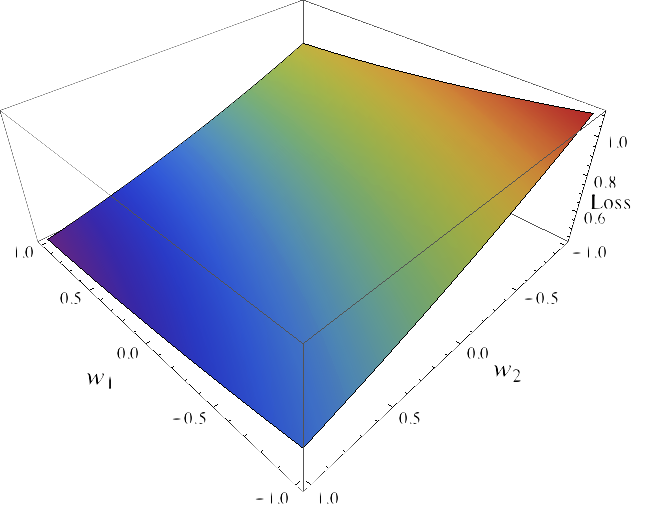 In short, we have replaced the $\ell$-risk which is computationally difficult to optimize with the $\Psi$-risk which has more advantageous properties. A natural questions to ask is how much have we lost by this change. The property of whether minimizing the $\Psi$-risk leads to a function that also minimizes the $\ell$-risk is often referred to as consistency or calibration. For a more formal definition see [1] and [2]. This property will depend on the surrogate function $\Psi$: for some functions $\Psi$ it will be verified the consistency property and for some not. One of the most useful characterizations was given in [1] and states that if $\Psi$ is convex then it is consistent if and only if it is differentiable at zero and $\Psi'(0) < 0$. This includes most of the commonly used surrogate loss functions, including hinge, logistic regression and Huber loss functions. 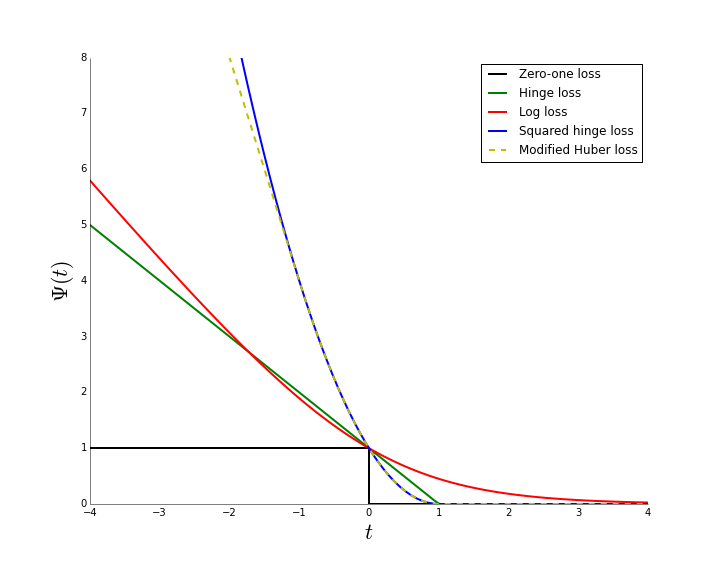