In this blog post I'll write down all the implementation details of this model, in the hope that not only the conclusions but also the process would be useful for future comparisons and benchmarks.

We consider the case in which the decision function is an affine function, i.e., $f(x) = \langle x, w \rangle + c$ where $w$ and $c$ are parameters to estimate. The loss function for the $\ell_2$-regularized logistic regression, i.e. the function to be minimized is

The gradient of the loss function is given by

Similarly, the logistic function $\phi$ used here can be computed in a more stable way using the formula

Finally, we will also need the Hessian for some second-order methods, which is given by

In Python, these function can be written as

I tried several methods to estimate this $\ell_2$-regularized logistic regression. There is one first-order method (that is, it only makes use of the gradient and not of the Hessian), Conjugate Gradient whereas all the others are Quasi-Newton methods. The method I tested are:

To assure the most accurate results across implementations, all timings were collected by callback functions that were called from the algorithm on each iteration. Finally, I plot the maximum absolute value of the gradient (=the infinity norm of the gradient) with respect to time.

The synthetic data used in the benchmarks was generated as described in 2 and consists primarily of the design matrix $X$ being Gaussian noise, the vector of coefficients is drawn also from a Gaussian distribution and the explained variable $y$ is generated as $y = \text{sign}(X w)$. We then perturb matrix $X$ by adding Gaussian noise with covariance 0.8. The number of samples and features was fixed to $10^4$ and $10^3$ respectively. The penalization parameter $\lambda$ was fixed to 1.

In this setting variables are typically uncorrelated and most solvers perform decently: 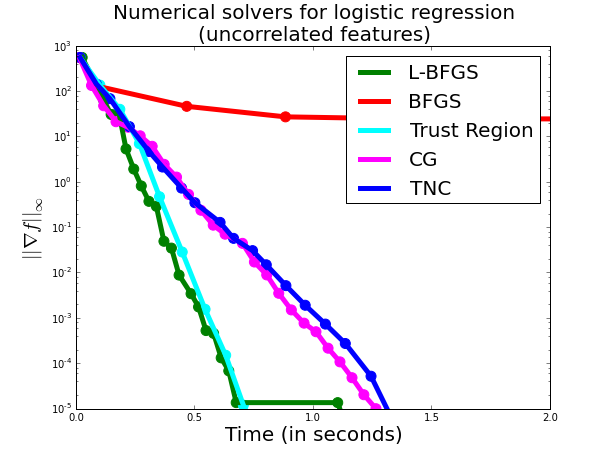 Here, the Trust Region and L-BFGS solver perform almost equally good, with Conjugate Gradient and Truncated Newton falling shortly behind. I was surprised by the difference between BFGS and L-BFGS, I would have thought that when memory was not an issue both algorithms should perform similarly.

To make things more interesting, we now make the design to be slightly more correlated. We do so by adding a constant term of 1 to the matrix $X$ and adding also a column vector of ones this matrix to account for the intercept. These are the results: 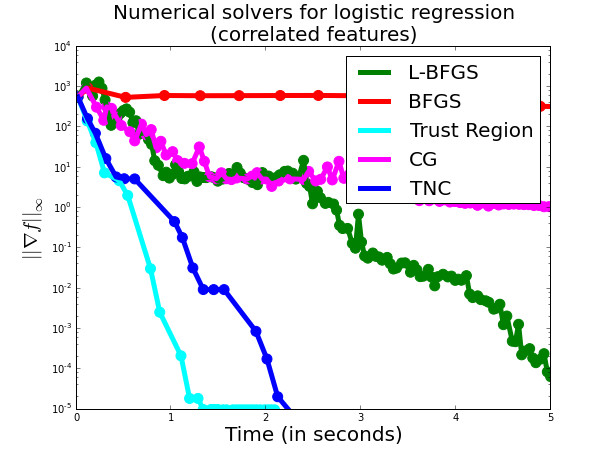 Here, we already see that second-order methods dominate over first-order methods (well, except for BFGS), with Trust Region clearly dominating the picture but with TNC not far behind.

Finally, if we force the matrix to be even more correlated (we add 10. to the design matrix $X$), then we have: 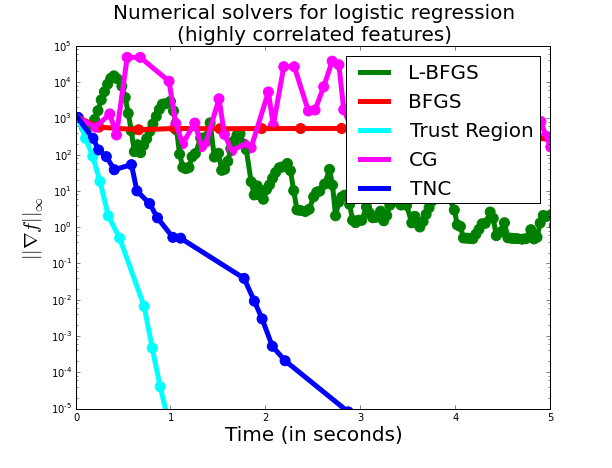 To sum up, the Trust Region method performs extremely well for optimizing the Logistic Regression model under different conditionings of the design matrix. The LIBLINEAR software uses this solver and thus has similar performance, with the sole exception that the evaluation of the logistic function and its derivatives is done in C++ instead of Python. In practice, however, due to the small number of iterations of this solver I haven't seen any significant difference.