info This is the third post in a series on the Frank-Wolfe algorithm. See here for Part 1, Part 2.

From an initial guess $\xx_0 \in \mathcal{D}$, the FW algorithm generates a sequence of iterates $\xx_1, \xx_2, \ldots$ that converge towards the solution to \eqref{eq:fw_objective}.

As other gradient-based methods, the FW algorithm depends on a step-size parameter ${\stepsize}_t$. Typical choices for this step-size are:

1. Predefined decreasing sequence. The simplest choice, developed in (Dunn and Harshbarger 1978) and more recently popularized in (Clarkson 2010, Jaggi 2013),, is to choose the step-size according to the pre-defined decreasing sequence \begin{equation} {\stepsize}_t = \frac{2}{t+2}~. \end{equation} This choice of step-size is straightforward and cheap to compute. However, in practice it performs worst than the alternatives, although it enjoys the same worst-case complexity bounds.

2. Exact line-search. Another alternative is to take the step-size that maximizes the decrease in objective along the update direction: \begin{equation}\label{eq:exact_ls} \stepsize_\star \in \argmin_{\stepsize \in [0, 1]} f(\xx_t + \stepsize \dd_t)~. \end{equation} By definition, this step-size gives the highest decrease per iteration. However, solving \eqref{eq:exact_ls} can be a costly optimization problem, so this variant is not practical except on a few specific cases where the above problem is easy to solve (for instance, in quadratic objective functions).

3. Demyanov-Rubinov step-size. A less-known but highly effective step-size strategy for FW in the case in which we have access to the Lipschitz constant of $\nabla f$, denoted $\Lipschitz$, is the following: \begin{equation} \label{eq:ls_demyanov} \stepsize = \min\left\{ \frac{g_t}{\Lipschitz\|\dd_t\|^2}, 1\right\}~. \end{equation} Note this step-size naturally goes to zero as we approach the optimum, which as we'll see in the next section is a desirable property. This is because the step-size is proportional to the Frank-Wolfe gap $g_t$, which is a measure of problem suboptimality. This strategy was first published by Demyanov and Rubinov in the 1960s, although surprisingly it seems to be less popular than the other approaches.

Those familiar with methods based on gradient descent might be surprised by the omission of adaptive step-size methods (also known as backtracking line search) from the previous list. In backtracking line-search, the step-size is selected based on a local condition. Examples of these are the Armijo and Goldstein (sometimes collectively referred to as Wolfe) conditions. These strategies have been wildly successful and are a core part of any state-of-the-art implementation of (proximal) gradient descent and Quasi-Newton methods. Surprisingly, backtracking line search have been almost absent from the literature on Frank-Wolfe.

There are important differences between the step-size of FW and gradient descent that can explain this disparity. Consider the following figure. In the left hand side we show a toy 2-dimensional constrained problem, where the level curves represent the value of the objective function, the pentagon are the constrain set, and the orange and violet curve shows the path taken by Frank-Wolfe and Gradient descent respectively when the step-size goes to zero (left). The right side plot shows the optimal step-size (determined by exact line-search) at every point of the optimization path.

This last plot highlights two crucial differences between the Frank-Wolfe and Gradient Descent that we need to keep in mind when designing a step-size scheduler:

Understanding the Demyanov-Rubinov step-size will be crucial to developing an effective adaptive step-size in the next section.

The right hand side is a quadratic function of $\stepsize$. Minimizing it subject to the constraint $\stepsize \in [0, 1]$ –to guarantee the iterates remain the domain – gives the following solution: \begin{equation} \stepsize_t^\text{DR} = \min\left\{ \frac{g_t}{\Lipschitz\|\dd_t\|^2}, 1\right\}\,, \end{equation} which is the DR step-size from Eq. \eqref{eq:ls_demyanov}.

The main drawback of the DR step-size is that it requires knowledge of the Lipschitz constant. This limits its usefulness because, first, it might be costly to compute this constant, and secondly, this constant is a global upper bound on the curvature, leading to suboptimal step-sizes in regions where the local curvature might be much smaller.

But there's a way around this limitation. It's possible estimate a step-size such that it guarantees a certain decrease of the objective without using global constants. The first work to attempt this was (Dunn 1980) who developed an analysis for the Goldstein-Armijo line-search. However, the algorithm that we'll present here is based on a different backtracking line-search algorithm which is more adapted to the Frank-Wolfe algorithm. It first appeared to the best of my knowledge in (Beck et al. 2015) and was later refined and generalized to many other Frank-Wolfe variants by myself and coauthors. 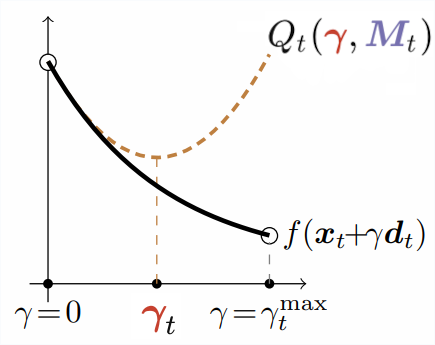 In practice there's little value in spending too much time finding the smallest possible value of $\LocalLipschitz_t$, and the most common strategy consists in initializing this value a bit smaller than the one used in the previous iterate (for example $0.99 \times \LocalLipschitz_{t-1}$), and correct if necessary.

The algorithm is not fully agnostic to the local Lipschitz constant, as it still requires to set an initial value for this constant, $\LocalLipschitz_{-1}$. One heuristic that I found works well in practice is to initialize it to the (approximate) local curvature along the update direction. For this, select a small $\varepsilon$, say $\varepsilon = 10^{-3}$ and set \begin{equation} \LocalLipschitz_{-1} = \frac{\|\nabla f(\xx_0) - \nabla f(\xx_0 + \varepsilon \dd_0)\|}{\varepsilon \|\dd_0\|}\,. \end{equation}

Our paper contains the full proof, including a proof for non-convex objectives, as well as extensions to many other Frank-Wolfe variants such as Pairwise and Away-steps.

The empirical speedup of the backtracking line-search is huge, sometimes up to an order of magnitude. Below I compare Frank-Wolfe with backtracking line-search (denoted adaptive) and with Demyanov-Rubinov step-size (denoted Lipschitz). All the problems are instances of logistic regression with $\ell_1$ regularization on different datasets using the copt software package.

If you've found this blog post useful, please consider citing it's full-length companion paper. This paper extends the theory presented here to other Frank-Wolfe variants such as Away-steps Frank-Wolfe and Pairwise Frank-Wolfe. Furthermore, it shows that these variants maintain its linear convergence with backtracking line-search.

Thanks Geoffrey Negiar and Quentin Berthet for feedback on this post.